Grass is for Parks 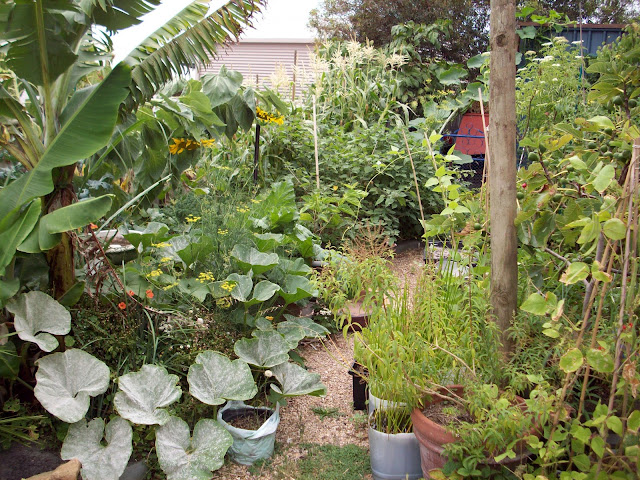 I have written a little bit about grass before. The fact that most of our back yard was grass when we moved in. To me it was a most illogical choice for such a small backyard as ours. It was the very first thing to go. We also have had a nasty invasion of grasses in the front native garden. Not the sort of grass that I want to let do its thing. It is really invasive and gets into everything. I had to take out a native bush just to get to the grass that had got into it when we bought the house. Even now there are runners coming up and I have resorted to spraying in that part of the garden given there are no food plants nearby and I RARELY even water it. In the heat of the last week it appears that I have managed to at least kill off what I can see of it.
It was always in the back of my mind what approach I would take when we had children. Where would they play? We talked about a small patch of grass in the back. I thought about it and thought about it. In between thinking about it, I continued to think about possibilities.
I have decided that my initial plan shall remain. We will forgo grass in our backyard for the many, many advantages that it creates by not having it, and use the perfectly good park a couple of hundred metres up the road for playing. Then there is the huge grassed area a little further, but still within a manageable distance for walks or bike rides in the future.

We are instead going to look at installing a sandpit and I am planning out a green cover for it to shade it during the day. I guess we will see what develops as time goes on. I have it planned out anyway.
To me there is a wealth of learning for a young child in the kind of garden we have created and the television will be further down on the list. When we get one.
Posted by JJ at 17:07

Our continual adventures in backyard food growing, seed saving and family raising as we further our transition into abundance. Furthering a quest to create our own little paradise and inspire others to do the same.